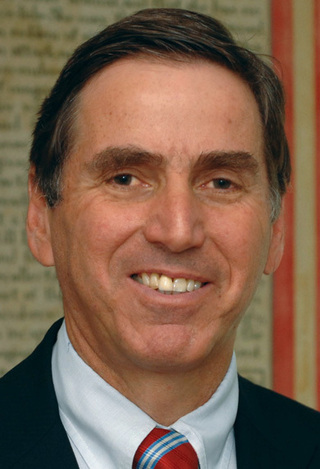 Lloyd Constantine is the Counsel of Constantine Cannon LLP, a commercial litigation firm in New York , Washington, D.C. and London with an internationally acclaimed antitrust practice. Lloyd founded the firm, originally called Constantine & Partners, with several friends in 1994 and was its Chairman and Managing Partner until January 2007.

Lloyd was Senior Advisor to the Governor of New York from January 2007 until April 2008. He advised the Governor on a broad range of policy issues and directed the Administration’s initiatives in the areas of Higher Education, Local Government Efficiency, Public Authority Reform and the legal representation of New York’s indigent in civil and criminal proceedings and served on New York’s Executive Clemency Committee. In 1998, Lloyd chaired the Transition Committee for New York Attorney General-Elect Eliot Spitzer and, in 2006 co-chaired the Spitzer gubernatorial transition.

Lloyd was lead counsel for the plaintiffs in the landmark Visa Check/MasterMoney Antitrust Litigation, which resulted in a $3.4 billion monetary settlement and an historic injunction, which the court valued as providing upwards of $87 billion in benefit for U.S. merchants and consumers.

Lloyd was the Assistant Attorney General in Charge of Antitrust for New York State (1980-1991). He served as Chair of the Antitrust Task Force of the National Association of Attorneys General (NAAG) from 1985-89. He is the principal author of NAAG’s 1987 “Merger Guidelines,” and 1985 and 1988 “Vertical Restraints Guidelines,” He also served as the States’ first liaison to the Executive Working Group for Antitrust (FTC-States-DOJ).

Lloyd has frequently testified before Congress on antitrust, international trade and nominations to the Supreme Court and “lower” federal courts. He has served as an expert on U.S. competition law and economics in Australian and Canadian antitrust cases.

Lloyd served on the board of the U.S. Department of Energy’s Brookhaven National Laboratory, was a Council Member of the ABA Section of Antitrust Law and Chair of the Sherman Act Section 2 Committee and served as Chair of the New York State Bar Association Antitrust Law Section. He served on the advisory boards of BNA Antitrust and Trade Regulation Report, the American Antitrust Institute and the Institute for Consumer Antitrust Studies. He also served on the boards of the Jacob K. Javits Convention Center of New York State and the Children for Children Foundation.

Lloyd was the recipient of the American Antitrust Institute’s award for career achievement in antitrust and regulatory policy (2004), the New York State Bar Antitrust Section Award for service to the legal profession and career achievement in antitrust law (2004) and was the first recipient of the National Association of Attorneys General “C. Raymond Marvin” Prize, awarded to outstanding Assistant State Attorneys General (1987).

Lloyd was a member of McDermott, Will & Emery from 1991 through March 1994. He devoted the first eight years of his career to the Legal Services program, representing poor people in civil rights and civil liberties cases. Lloyd was an Adjunct Professor of Antitrust Law at Fordham University School of Law from 1989 through 1996.

Lloyd is the author of two books: PRICELESS: The Case That Brought Down The Visa/MasterCard Bank Cartel, and JOURNAL OF THE PLAGUE YEAR: An Insider’s Chronicle Of Eliot Spitzer’s Short And Tragic Reign. Both books were published by Kaplan, 2009 and 2010 and by Skyhorse in revised paperbacks, 2012. He is a frequent contributor to numerous newspapers and periodicals and a regular contributor of legal, political and social commentary to Hearst’s Albany Times Union.
Lloyd received his undergraduate degree from Williams College and his J.D. from Columbia Law. At Williams, Lloyd played football and tennis, worked at the Berkshire Farm for Boys and was an exchange student to Howard University in the disastrous Spring semester of 1968. Lloyd also did a year of doctoral work in the graduate faculty of Political Science at Columbia, without degree.

Lloyd is married to Jan Friedman Constantine, General Counsel of the Authors Guild, a member of Constantine Cannon and an accomplished cabaret performer, with a wide following. Jan and Lloyd have three children, Isaac, a gifted writer of literary fiction and poetry, Sarah, a doctoral candidate in clinical psychology, involved in cutting edge research on female sexuality and Elizabeth, a “force of nature” production assistant in television, who has worked on the Colbert Report, Dr. Oz and for the Martha Stewart and Oprah Winfrey networks.