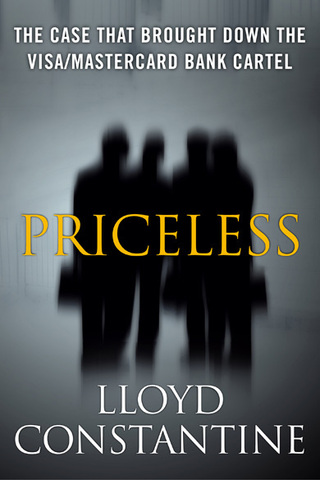 Priceless: The Case That Brought Down The Visa/MasterCard Bank Cartel

The largest federal antitrust settlement in U.S. history – with a ground-breaking settlement of $3.4 billion – began with a shocking conversation overheard at a New York restaurant. Priceless: The Case That Brought Down The Visa/MasterCard Bank Cartel, by author and lead counsel Lloyd Constantine, is a riveting non-fiction triumphant David and Goliath legal drama that captivates until the very last page. This fast-paced tale pits Constantine’s boutique law firm, representing America’s merchants, against the all-powerful credit card cartel of Visa and MasterCard. The high stakes litigation put his entire career at risk eventually crushing the monopoly and ended the cartel’s stranglehold on retailers, saving merchants and consumers upwards of $87 billion.

The Visa Check/MasterMoney Antitrust Litigation began when clothing retailer The Limited approached Constantine to argue that Visa and MasterCard’s monopoly and outrageous fees constituted antitrust violations. The Limited tried to recruit other merchants but met with negative responses and all were unwilling to take on the giants Visa and MasterCard. The tables turned when Wal-Mart’s request for a fee reduction was rudely rebuffed by the cartel – and soon joined Constantine’s crusade along with others including Sears Roebuck, Circuit City and Safeway with five million stores soon following. Willing to risk losing absolutely everything, Constantine took the case on a contingency basis.

Priceless rips open the case to show the inner workings and the seamy underbelly of credit card companies, bringing to light the anti-consumer practices of Visa and MasterCard. The book reveals the failures of government agencies, which created companies “too big to fail” and permitted the abusive credit practices, now at the core of our current economic recession.

Constantine took on a decade-long struggle during the prime of his career that led his little firm twice to the U.S. Supreme Court until Judge John Gleason virtually imprisoned both sides at the settlement table the week before the trial began to hammer out a settlement that would be in the best interests of merchants, consumers and the American economy.

Lloyd Constantine, a graduate of Williams College and Columbia Law School, was Assistant Attorney General of Antitrust for New York State from 1980-1991. As Chair of the Antitrust Task Force of the National Association of Attorneys General from 1985-1989, he began a movement that led to uniform antitrust enforcement guidelines. In 1994 he opened a boutique antitrust specialty firm – Constantine & Partners, later Constantine Canon. His political involvements, including serving as senior advisor in the Spitzer administration, precluded him from telling this story until now.